Our new typeface for the London Fire Brigade in collaboration with Studio Sutherl&.

Fire Brigade Headline is the new typeface designed by The Foundry Types for the London Fire Brigade (LFB), in collaboration with leading London design agency Studio Sutherl&. The new display typeface combines two fonts layered together to form a 3D drop shadow effect – a modern take on the vintage Fire Engine lettering of a bygone era.

The London Fire Brigade commissioned The Foundry Types to create a bespoke typeface that is historic, relatable, and dynamic. The new Headline typeface will sit alongside the current primary typeface, Fire Brigade Sans, which seamlessly integrates with the new LFB brand identity. Inspired by the fire station architecture, façade signage, hand-painted lettering on the sides of horse-drawn Victorian water pumps, and London’s bygone fire engines. The grotesque style also embodies all the LFB’s desired characteristics: uniquely modern but classic, human and approachable, robust, bold, and strong.

The pure, simple, and humanistic forms of Fire Brigade Headline display are purposeful, and powerful yet with a warm tone of voice. Small design details: the indented middle E bar reminiscent of many 18th century sans serifs, low-legged ‘K’, ‘Q’ with a through bar, and distinctive figure ‘1’ and ‘7’ gives the font its character. The shadow of the font angle is set at 45˚ giving a sense of three-dimensional quality that is almost tangible.

When combining the two fonts; Regular and Shadow together, to create a 3D drop shadow effect, many overlapping and misalignment technical problems had to be resolved. Each glyph had to be crafted accurately to align perfectly when layered, promoting the appearance of a single 3D font. For instance, the rounder letters, ‘B, C, D, G, O, P, R, and S’ needed fuller curved shapes that enhances the depth of the shadow in keeping visually with the other letters. Also, the Regular or Shadow font can be used independently or alongside its counterpart. 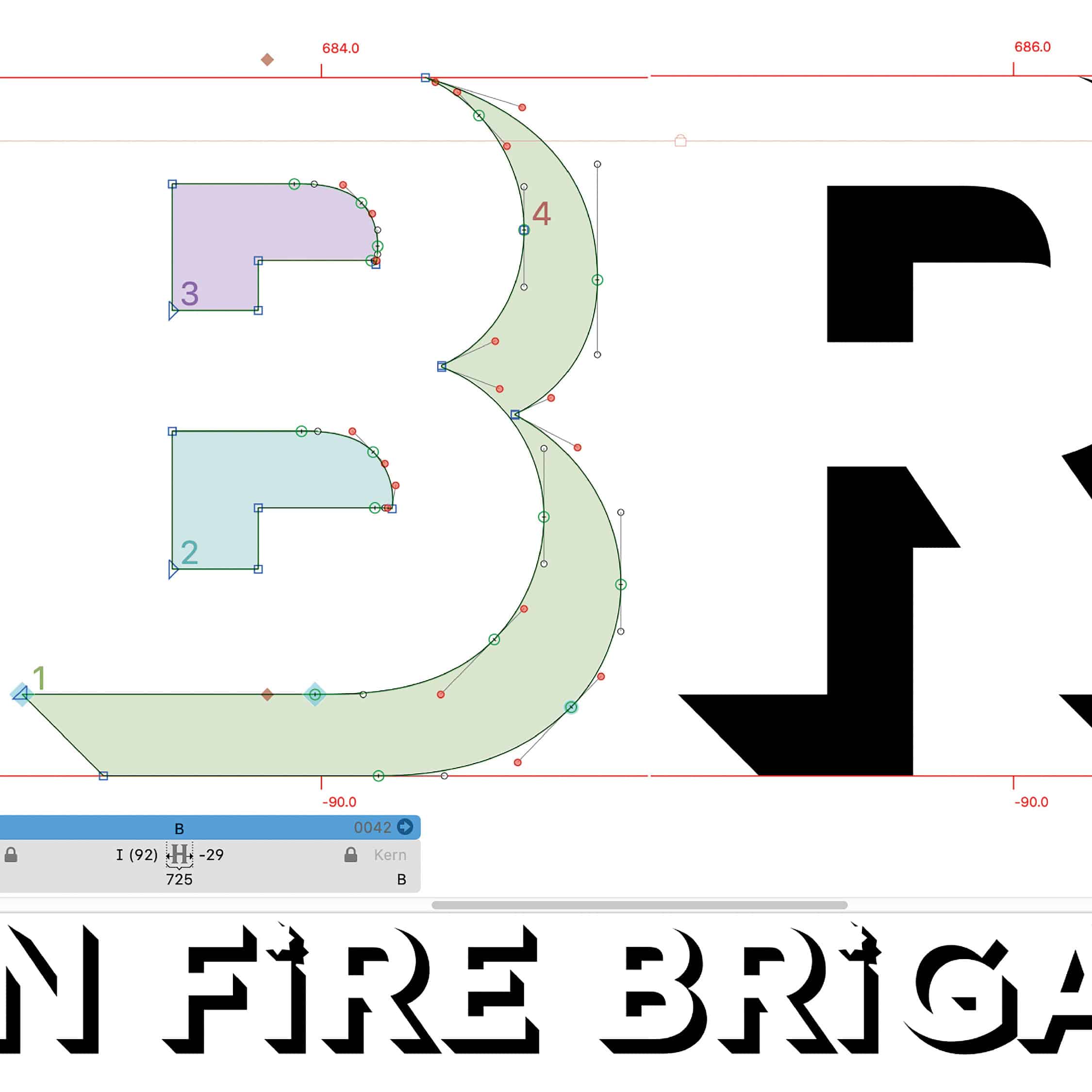 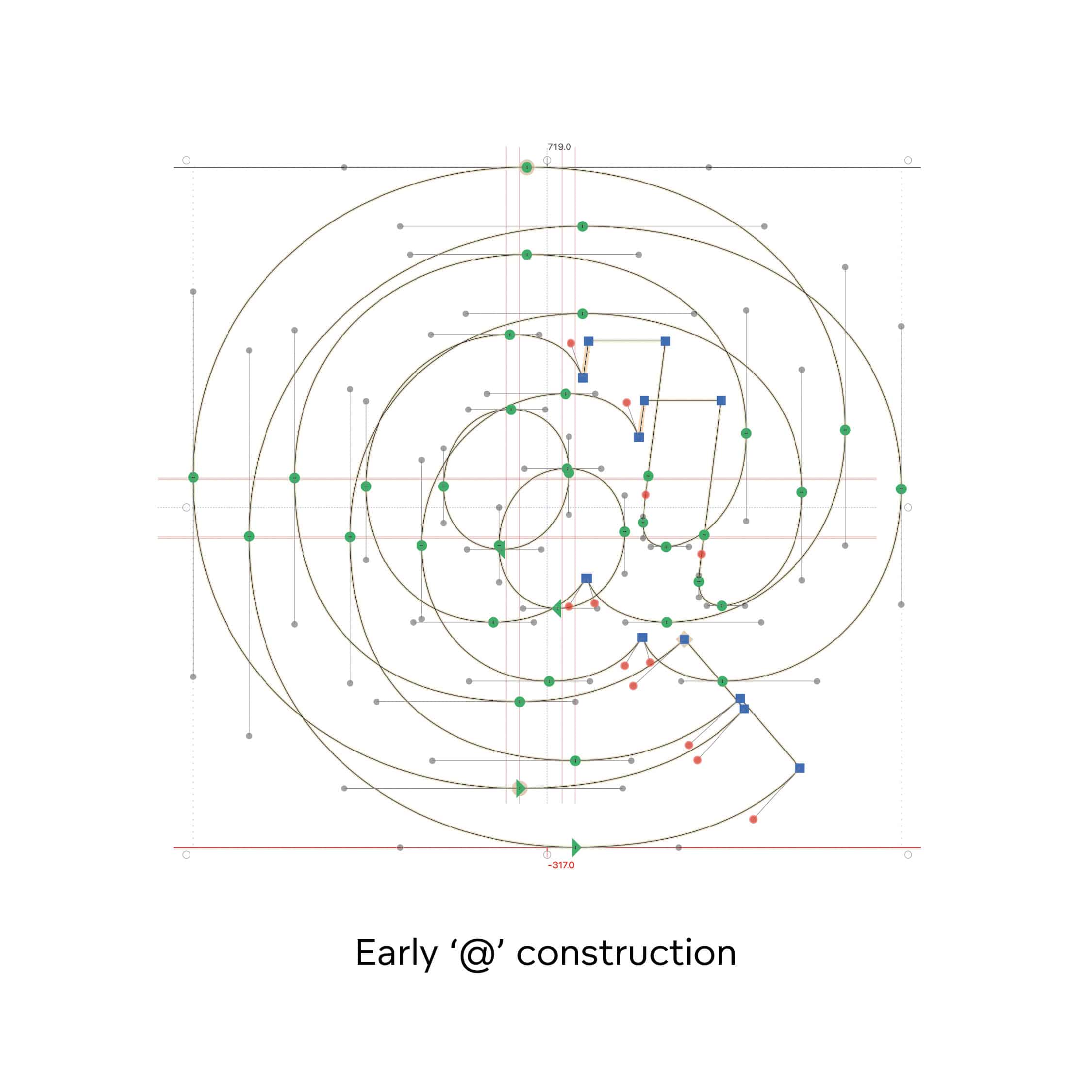 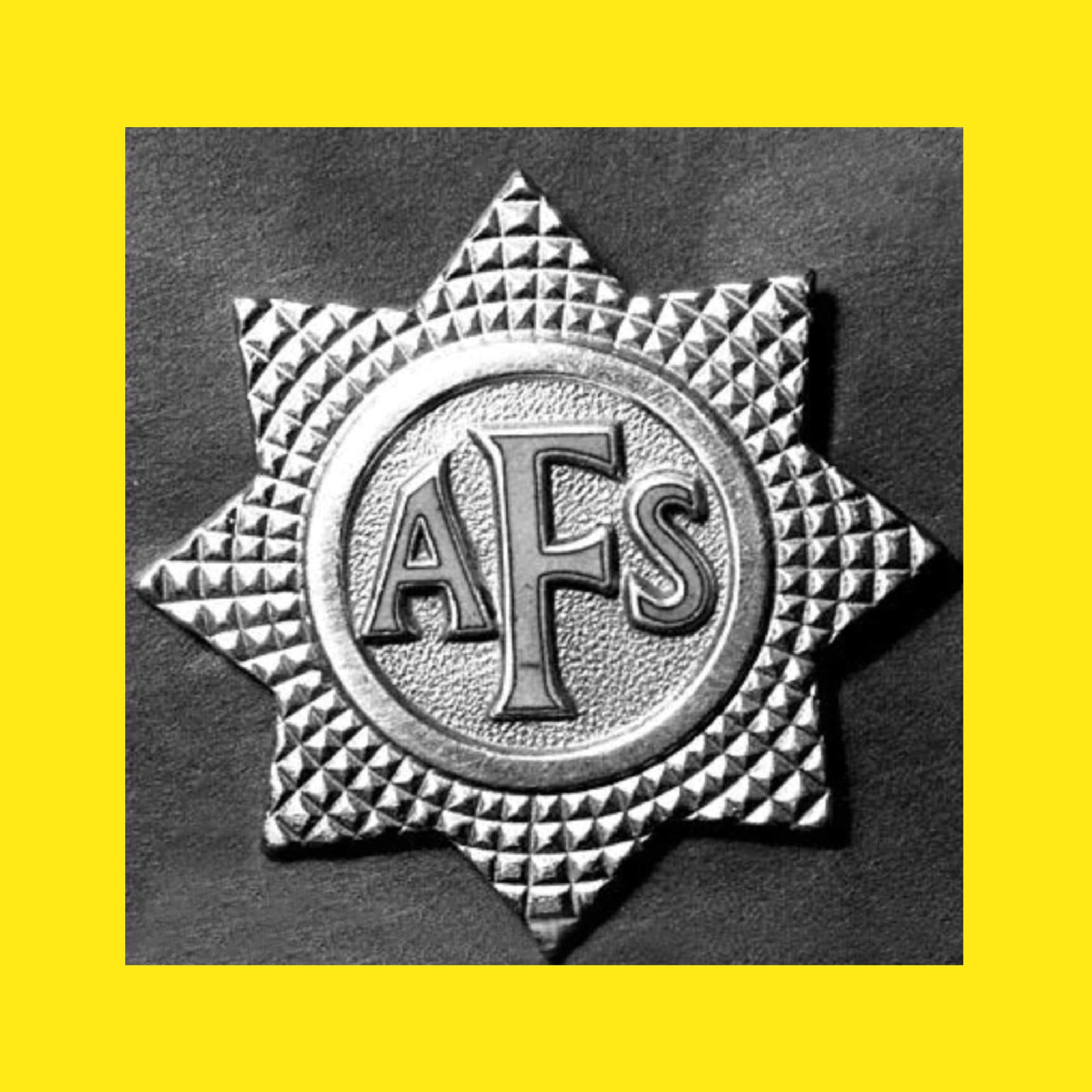 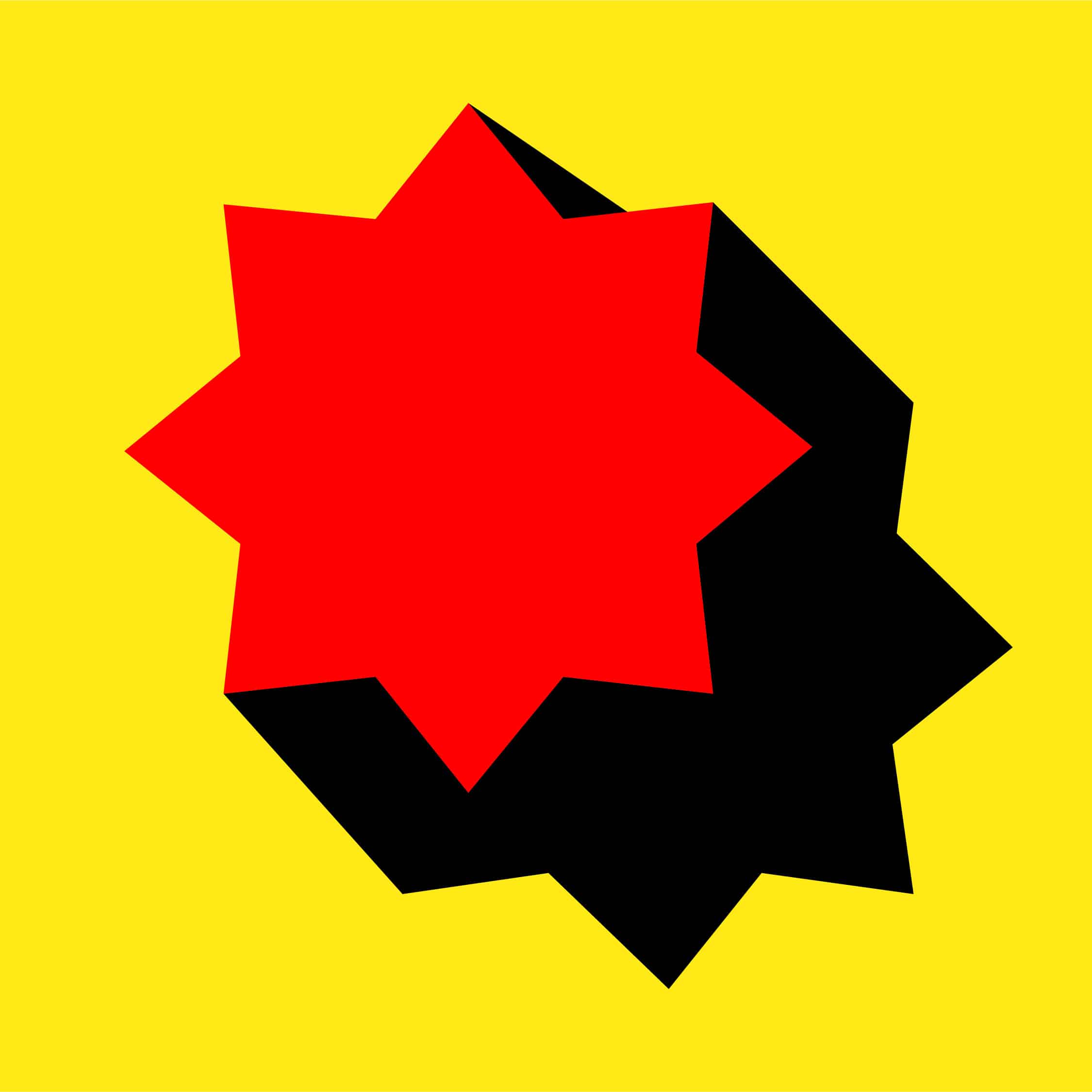 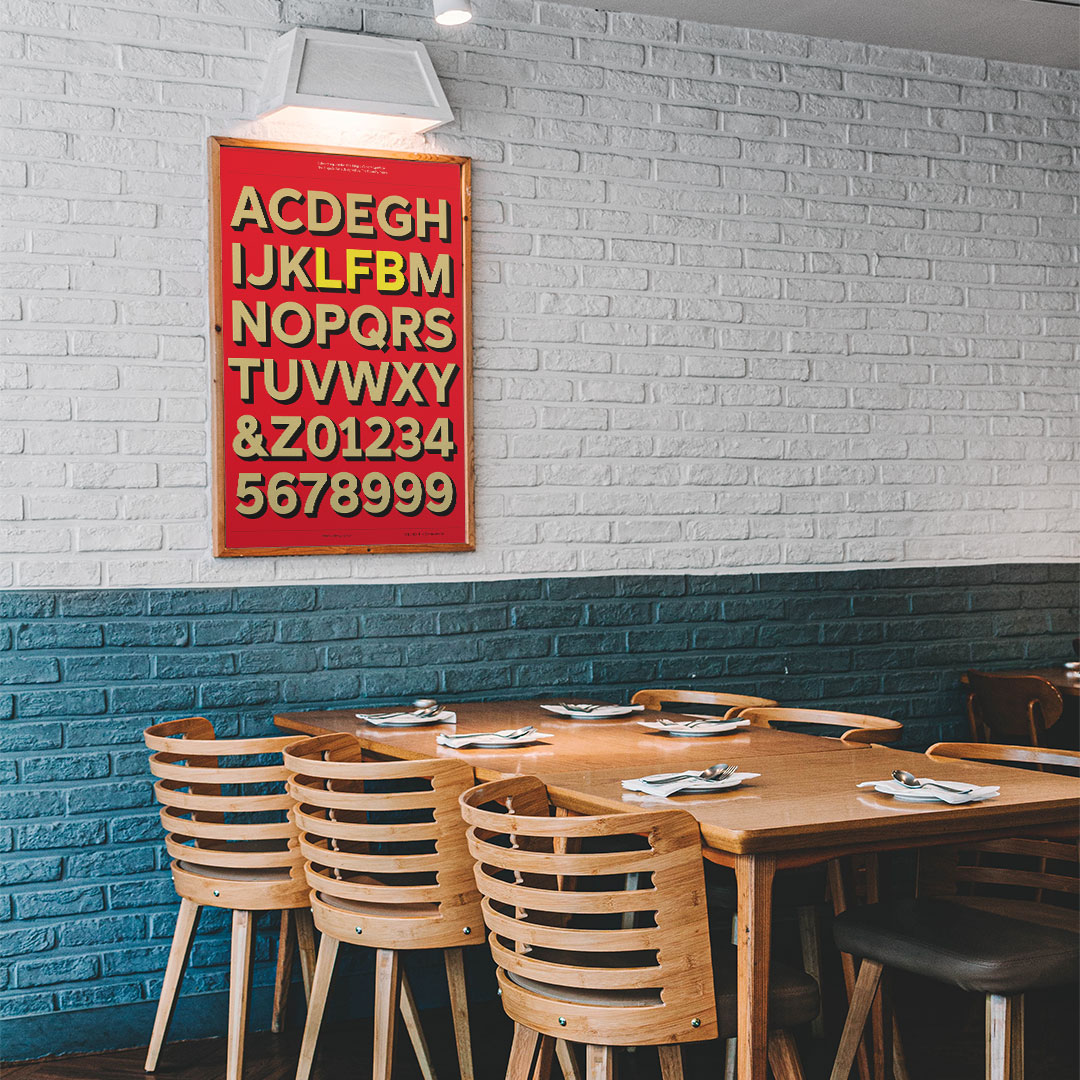 The character set contains; capitals, figures, a set of eight arrows, punctuation, and a range of alternative glyphs; an extra ‘M’, two lowercase ‘i’s’, and punctuation with the LFB ‘Insignia Star Badge’ emblem. Also, not to forget that there’s a quirky double hashtag, echoing a fireman’s ladder – adding a sense of humour.

London Fire Brigade approached The Foundry Types to create a bespoke font. The aim was to address accessibility issues within the current primary typeface, Foundry Sans which could be incorporated across LFB branding as a gentle upgrade over time, and to create a brand new London Fire Brigade inspired headline typeface to deliver dramatic effects. We are delighted with the new Fire Brigade Sans typeface, in particular the drop shadow headline font, which celebrates the original lettering used on fire engines across the Brigade.

We worked closely with The Foundry Types and the internal London Fire Brigade team to design the headline shadow font together. Inspired by the beautiful lettering on old London engines – but also informed by the idea of being in the shadow of the flames and flashing sirens. We’ve introduced a whole series of alternate glyphs – using the unique LFB star badge symbol for tittles, ellipsis, question, and exclamation marks – and a bespoke double hashtag as a ladder.

Stuart de Rozario, (Director/Designer – The Foundry Types)
Our aim was to design a typeface that captured the spirit and rich heritage of the London Fire Brigade – a caring, human, and incredibly brave institution that has spanned many centuries through wars, disasters, and technological advancements in firefighting.

Fire Brigade Headline, is a modern but classic drop shadow geometric and grotesque font, that pays homage to the strong and robust lettering of vintage fire engines of bygone eras. A bold, unique, and dynamic type to align with the London Fire Brigade’s ethos.

The Fire Brigade Headline typeface was designed exclusively for the London Fire Brigade and is not available to licence. If you have a project that you want to discuss, please contact us, to explore what we can do for you.

Fernhout – the new typeface for the Dutch Design Week